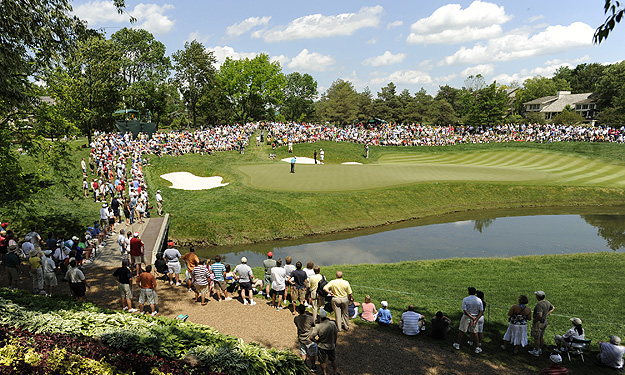 Jack Nicklaus is largely responsible for South Florida becoming a golf mecca. The North Palm Beach resident was the first major golfer to call the area home and set up roots. He built the Bears Club in his back yard and attracted some of the best golfers in the history of the sport to come join him. While Nicklaus has become synonymous with South Florida, he still keeps his connection with Ohio strong.

Before moving to Florida in the winter of 1970, Nicklaus spent his early years in Ohio. Born in the town of Upper Arlington, he attended Ohio State. Ohio has always held a special place in his heart and in 1974 he opened Muirfield Village Golf Club in Dublin. Then in 1976, he started his own tournament at the club, the Memorial Tournament. Since its inception, the Memorial has become one of the top stops on tour, attracting some of golf's biggest names.

With its placement on the schedule (2 weeks before the U.S. Open) and Jack's name behind it, it is a must-play event for anyone that is lucky enough to get one of the 75 invitations that is handed out by Nicklaus.

This year is no exception. Once again, the biggest names in golf will tee it up this week on the par 72 Nicklaus designed course. Here is a look at some of the notable local golfers in this week's event.

Tiger Woods- The Jupiter Island resident has won here five times already in his career including a two shot win last year. Woods is coming off a win at The Players earlier this month, his fourth win of the season. With five wins at Jack's course and another three top 5s, Woods will be a heavy favorite again this week.

Rory Mcllroy- While he missed the cut last week in England, he already has four top 25s state-side this year. A member of Jack's Bears Club in Jupiter, Mcllroy will look for his first win of the year on a course where he has two top 10 finishes in the last three years.

Keegan Bradley- Bradley is coming off his best showing of the year when he finished runner-up at the Byron Nelson two weeks ago. The Tequesta resident shot a course record in round 1 and held the lead through 54 holes before finishing second. Bradley will look to get his first win of the year on a course where he has not seen a lot of success. Bradley has yet to make the cut at the Memorial in his previous two tries.

Ernie Els- Els is making his 20th consecutive appearance at Muirfield. In those 20 events, he has finished in the top 10 in half of them, including a victory in 2004. The Jupiter resident has already had an impressive start to the season with five top 15 finishes, including a sixth place finish last weekend at the BMW PGA Championship.

Luke Donald- Donald missed out on his three-pete last week in England. Now he is returning to the U.S. with some recent success at the Memorial. In his nine appearances at Muirfield Village, the Bears Club resident has finished in the top 15 four times, with all four coming since 2009.

Lee Westwood- With his tie for ninth last week at the BMW PGA Championship, the Old Palm resident has five straight top 10 finishes this year. Her will look to make it six at a course he hasn't played since he finished 29th in 2003.

Other notable players teeing it up this week include:

Adam Scott- The Masters champion has not played much since his playoff victory at Augusta in April. Since his win, his only other appearance before this week was a 19th place finish at The Players. He has two top five finishes at the Memorial in his career.

Guan Tianlang- The 14 year old from China accepted an invite from Jack and will make fourth start on the PGA Tour. Since becoming the youngest person ever to make the cut at the Masters, Tianlang followed that up by going under par to make the cut at the Zurich Classic of New Orleans. He missed the cut two weeks ago at the Byron Nelson, but with the invitation by Jack and his acceptance to play in next week's St. Jude's Classic, the summer of Guan will look to continue.

For more information on this week's Memorial Tournament, visit www.pgatour.com.