The 2012 Palm Beach Holiday Boat Parade kicks off the holiday season this Saturday, December 1, 2012 at 6:00p.m with a traveling fireworks display up the Intracoastal Waterway.  The parade will travel 10 miles, from North Palm Beach, south of the North Palm Beach Marina, to the Jupiter Lighthouse, via the Intracoastal Waterway.  The parade begins at 6:00 pm and arrives in Jupiter approximately around 8:00 pm.   The parade benefits U.S. Marines “Toys for Tots” and last year collected more than 18,000 toys for needy children in Palm Beach County.

Bring your own chair and enjoy the sounds of the season with holiday entertainment while you relax and watch the decorated boats leisurely float by. The Town of Jupiter and the Marine Industry Association of Palm Beach County are teaming up to bring the Holiday Boat Parade north to Jupiter and the Jupiter Lighthouse.  Head over to the Jupiter Riverwalk for a special waterside parade-viewing event including food, music, and festivities for the boat parade. In addition to the Riverwalk Events plaza, the boat parade can be viewed from Sawfish Bay Park and Lighthouse Park.  Festivities begin at 6:00pm. The boat parade is a continuation from its starting point in North Palm Beach. 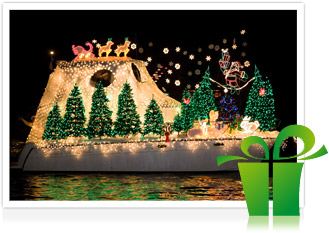 If you are in Martin County, the 30th Annual Martin County Christmas Boat Parade commences at 6:00pm in the  St. Lucie River near City Hall of Stuart. Bring a blanket or a couple of chairs to watch.  It will proceed southeasterly to the end of Manatee Pocket at Finz Restaurant ending at Twin Rivers Park in Rocky Point. The holiday boat parade will pass by around 7:00pm. Marine Industries Association of the Treasure Coast, Inc. sponsors the holiday boat parade.